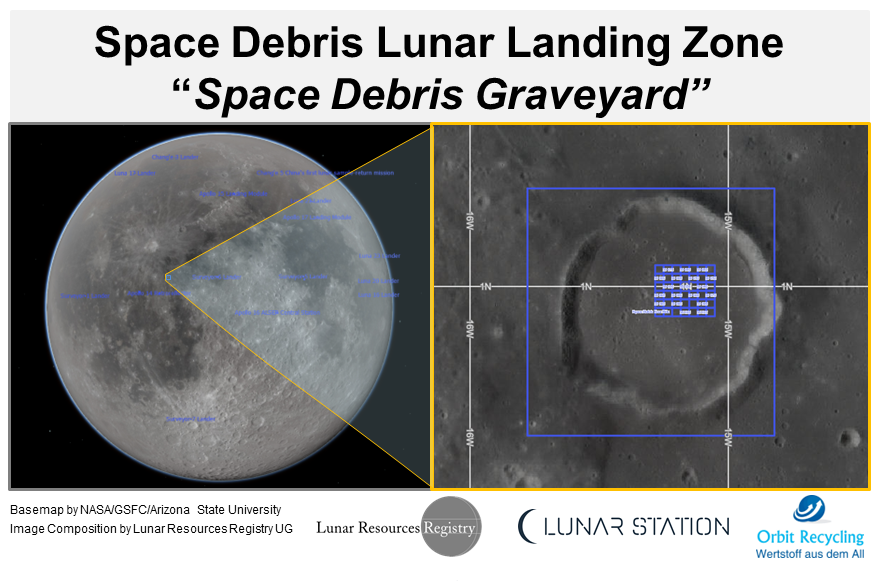 Space Debris needs innovative solutions, and ultimately destinations for potentially dangerous debris. Thanks to the initiative of three emerging space companies, a forward-thinking approach is the designation of an area on the Moon’s near-side as a Space Debris Lunar Landing Zone, for planned de-orbiting and potential recycling of spacecraft; satellites, probes, boosters. It is also alternatively named a Space Debris Graveyard.

For decades the Moon has been the target for probes, boosters, landers, de-orbited satellites, and humans.

To date there are about 50 debris sites. Now there is an organized space debris solution that benefits the Earth, and the Moon.
Space Debris is also part of the Artemis Accords, which stipulates “mitigation of orbital debris, including the safe, timely, and efficient passivation and disposal of spacecraft at the end of their missions…”
Current mission planning requires an end-of-life plan, the Space Debris Graveyard is an optimal solution that stops the unnecessary pollution of our upper-atmosphere and avoids potential de-orbiting problems. For satellites and spacecraft in geosynchronous orbit, there is already a graveyard 300km above GEO. A Space Debris Graveyard on the Moon is a lasting solution, resting place, and potential recycling location, for retired spacecraft transported to the chosen location using space tugs, propulsion, navigation and on-orbit servicing technologies.

Space Debris Mitigation relies on planning for eventualities, and creating distinct locations for potential hazardous spacecraft, including ancillary hardware (boosters). Although not all hardware is capable of inserting itself in a Lunar orbit, and de-orbiting to a designated location or precise landing zone, there is a need to provide a designated location for hardware that can.
The three CisLunar focused companies have co-developed a “Space Debris Graveyard” as a solution to an emerging problem – spacecraft retired in orbit pose a hazard and may need to be de-orbited to a zone fit for that purpose.

Orbit Recycling, from Germany, recognized the value of space debris. Raw materials are regained from waste for new purposes. Explicitly, Orbit Recycling and its research partners have developed the process of aluminium casting in Moon dust (regolith). The establishment of a lunar landfill would increase the concentration of the debris in a small, dedicated area, making the recycling process more efficient. Besides its existing target list, Orbit Recycling is looking for additional space mission objects to be recycled in the future and is already open for new contracts to be signed.

Lunar Resources Registry, also from Germany, is developing zoning for potential commercial resources, infrastructure, and energy operations, plus scientific missions. It already maintains a Public Registry of spacecraft, including Actual landing zones, Impact zones (intentional and accidental), and for Planned Missions. For the planning and zoning of a Space Debris Graveyard, the parameters were 1. On the Moon’s near-side, 2. In an area void of existing Landers and resources, and 3. A flattish, shallow and wide crater that could be the destination of precision landed spacecraft, and those with minimal capabilities for such precision. Gambert crater was proposed and evaluated as a potential candidate.

Lunar Station, a world-class provider of Lunar environmental and orbital intelligence, provided the terrain analysis to verify that part of Gambert crater was suitable for the specification. Their mantra is “Unlocking Lunar Insights” and using their MoonHackerTM analytical platform have mapped a path for rovers into the crater, identified critical access points into and out of the crater, and how to traverse it. From these insights it is possible to plan rover-led recycling operations of landed spacecraft.

About Impacts in the Gambert Crater

Gambert Crater is roughly 20km wide and has crater walls about 100 meters high. It is below the Moon’s median surface level.

High speed impacts will create a crater about 12 meters wide, a debris field about 300 meters wide, and debris and regolith clouds kicked up will most likely not rise above the crater walls (100m).

1. Lunar Orbiters that lack the propulsion for continual station keeping can be instructed to de-orbit to the SDLLZ.

2. Spacecraft that with their own propulsion, or with the assistance of on-orbit service tugs, either exiting an existing orbit (e.g. Geosynchronous) or having maintained a Lunar Orbit, can be directed to the SDLLZ.

3. Precision Landing: To date the few spacecraft that can conduct a precision landing require a specific end of life destination, when they can alternatively be directed to conduct final missions at specific strategic and scientific locations. However, this will change, and even spacecraft with precision and the necessary propulsion, will require a designated Space Debris Mitigation location.

4. Minimal-Precision Landing: the SDLLZ offers a wide target-area for a spacecraft’s de-orbit and impact.

6. Recycling of debris: For non-precision landing, there is the possibility of recycling debris scattered and embedded in regolith.

For Recycling purposes, a path into the designation crater, and across the crater floor, has been plotted for Rovers to locate hardware and debris.

A full analytical overview of the Space Debris Graveyard is available from Lunar Station.

Heading to the Moon for exploration, the prospect of extracting resource or to support lunar operations, public or commercial? Contact us and we will be pleased to introduce you to specialists well matched to your requirements to help you electively (and efficiently) plan a practical, profitable Lunar operation.

Registrations are available. Get in contact with Lunar Resources Registry.

Are you planning a mission to the Moon for exploration, the prospect of extracting resources, or to support Lunar operations, both public and commercial? Get in contact with us, and we can introduce you to our process for Lunar Registrations.

Below are multiple paths simulated so that Rovers can enter and traverse across Gambert crater from different access points, to undertake debris inspection and recycling operations.

Below is a Slope Map of Gambert Crater. Landing Zones have been created in the flatter areas.

Below, as depicted by Histogram of Slopes, the first two bars show that the majority of the terrain has slopes less than ten degrees. This is an optimum environment in which to manage and mitigate space debris on a scale that’s required for a sustainable impact to large and complex space debris problem.