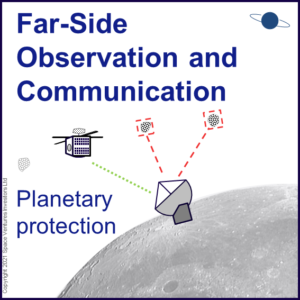 This is Partnership Registration from Lunar Resources Registry and Lunar Station.

To view the Registration on our online Registry Map, click on the image below:

Nestled in shallow Ear-shaped crater, is the Registration for a location that is ideal for a Science based Observatory operation, be it a Radio Telescope or Asteroid Detection.

“The Ear” is a Partnership Science Registration for a proposed research location, created by Lunar Resources Registry and Lunar Station Corporation.
The location is on the far-side the Moon, where the planned observatory has less interference from the noise of Earth.
The Scientific Registration is open to space agencies, the scientific community, and potential designers and manufacturers of the hardware required for Radio Telescope or Asteroid Detection Observatory.
The far side of the Moon is a convenient location for a planned low-frequency radio telescope as it is not exposed to radio transmissions from Earth. Due to an absence of lunar atmospheric and ionospheric noise, ultra-long wavelength observations are possible. Radio frequency interference is produced by human activities, such as on Earth (e.g. military and commercial transmitters, satellites, or mobile phones). Also because of the Moon’s synchronous rotation, the far side never faces towards Earth. It will not be affected by the volume of noise and interference from Earth. Another critical function of a radio telescope located on the lunar far side would be detection and prediction of potential collision with astronomical objects like e.g. Asteroids, and Near Earth Objects.

NASA has already provided information on a potential Lunar Crater Radio Telescope on the Far-Side of the Moon. It would be an ultra-long-wavelength radio telescope.

Below are two Lunar Analytical Images from Lunar Station Corp.

Below a from Lunar Station. The white point represents a flat area for a possible lander.

Below is a registration of “The Ear” from Lunar Resources Registry: